Home » GENERA P » Polystachya » Polystachya mauritiana
Back to Category Overview
Total images in all categories: 12,058
Total number of hits on all images: 7,353,436 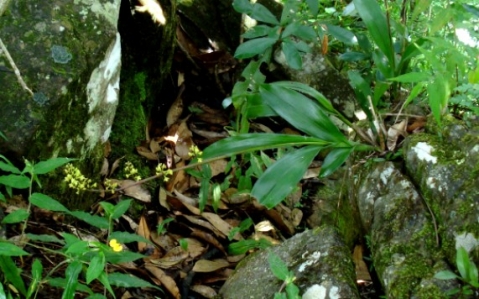 Polystachya mauritiana is an epiphytic or occasionally a lithophytic orchid of small to medium size. An epiphyte is a plant that grows above the ground, supported noparasitically by another plant or object, deriving its nutrients and water from rain, the air, dust, etc. A lithophytic plant grows on a rock, not in the ground.

The distribution of the species in South Africa is in the east of the country, from the Eastern Cape and KwaZulu-Natal to Mpumalanga and Limpopo. This plant not only grows widespread in tropical Africa, but maybe similar species found in parts of Asia and central America are the same.

The habitat of the species is deeply shaded tropical and subtropical forests, often on streambanks, at elevations from 700 m to 1200 m. Although uncommon, but spread so widely, the species is not considered to be threatened in its habitat early in the twenty first century.

Only 11 of the about 200 Polystachya species occur in southern Africa. The others are mainly African, some found in Asia, Australia and America.

P. concreta is a synonym, one of the plant’s earlier names. P. tessellata may be a closely aligned species, by some also considered to be identical to P. mauritiana (Leistner, (Ed.), 2000; www.orchidspecies.com; www.zimbabweflora.co.zw; www.redlist.sanbi.org).