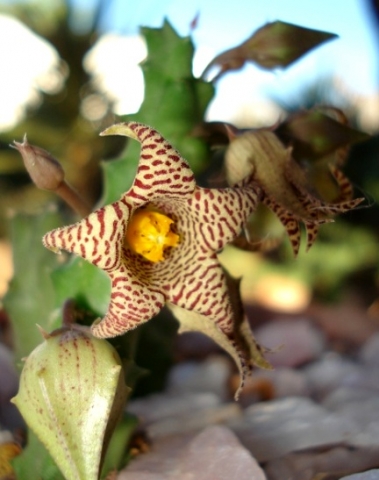 This flower of Piaranthus punctatus var. punctatus was photographed in April near Keimoes in the Northern Cape. The genus Piaranthus, comprising only 7 species, is one of the smaller and lesser known genera of the Apocynaceae or milkweed family.

Piaranthus superficially resembles Huernia, but the flower stalks can be seen in the photo to emerge from all along the length of the stems, also near the top. In Huernia species flowers grow from the stem base. Huernia flowers grow solitary, while Piaranthus may issue more than one flower from the same node. There is no annulus (a thick ring sometimes found around the corolla centre) present here, a feature fairly common in Huernia.

The five-pointed star-shape of the corolla displays strong recurving of the acutely pointed and long corolla lobes. The pale, cream-coloured corolla has scattered and irregularly shaped transversal maroon lines and spots across its upper surface. Colour variations occur in the species. The outside of the corolla is shiny and greenish cream with a few vertical rows of dark red dots. The unopened buds show thick, spiny protrusions halfway up their length on the seams of the lobe margins.

A yellow columnar corona forms the flower centre. Narrowly pointed calyx lobes are visible on some of the unopened bulbous buds in the photo. Green stem columns with evenly spaced tubercular protrusions can be seen among the flowers.

The species distribution lies in a band along the border between the Western Cape and the Northern Cape. The plant has a stable population in its habitat early in the twenty first century (Smith, et al, 1997; iSpot).