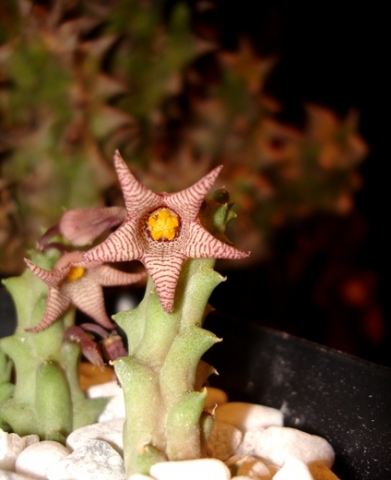 The ovoid to cylindrical stems are pale green and slightly rough-surfaced. Bulging tubercles grow in angled columns up the stems, each tubercle tipped with a short-lived, vestigial leaf.

The bell-shaped flowers grow solitary or in several-flowered inflorescences on peduncles of up to 2 cm long. The flowers have five-pointed, star-shaped corollas, ivory-coloured and covered in tiny, globose surface papillae as well as red to maroon transversal bands and some spots. The yellow corona in the corolla centre is barrel-shaped and five-lobed. The flowers, about 2 cm in diameter are sometimes honey-scented.

The other variety of this species, var. punctatus with hairy corolla lacks the papillae upon the corolla and has a winged corona. Flowering of var. framesii happens in late summer and in autumn. The fruit follicles become 10 cm long, bearing fairly large seeds.

P. punctatus var. framesii grows in the west of the Karoo towards Namaqualand on higher mountain slopes, at elevations ranging from 500 m to 1100 m. This is in contrast to var. punctatus that is typically found in low-lying succulent Karoo terrain. The two varieties also hybridise with each other in nature. Var. framesii is not considered to be threatened in its habitat early in the twenty first century (http://llifle.com; www.redlist.sanbi.org).