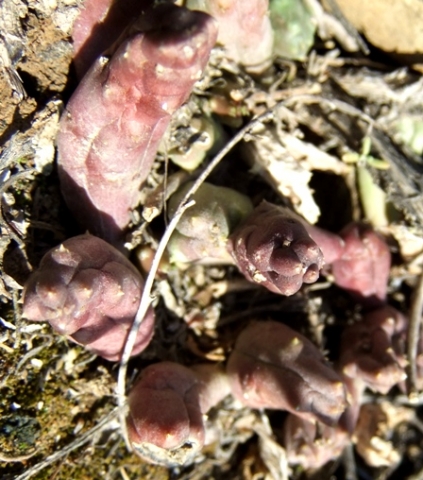 Piaranthus geminatus subsp. geminatus is a low-growing stem succulent that may form a mat under the taller shrubbery of its habitat. The plant grows to 5 cm in height. The stems are usually four-angled, sometimes five-angled; the stems reaching about 1,5 cm in diameter. Stems often lie on the ground, sometimes with their tips turned up.

The sepals of Piaranthus flowers are ovate and hairless, tapering to acutely angled tips. The flower has a spreading corolla in a five-pointed star-shape, as well as a small central corona, also five-lobed. Flower colour is usually yellow with mottling in red, purple or brown.

While solitary flowers and groups of up to four are sometimes seen from a stem tip, this plant usually produces its flowers in pairs. This led to the specific name of geminatus and a common name of twin piaranthus. Several other Piaranthus species commonly produce twin flowers, however, as well.

There is mention of a third subspecies, P. geminatus subsp. foetidus bearing "sweetly very malodorous" flowers that are densely felted, growing in the west of the Little Karoo and in the Great Karoo between Prince Albert and Beaufort West. Confirmation of its existence could not be ascertained (White and Sloane, 1937; Vlok and Schutte-Vlok, 2010; Frandsen, 2017; http://redlist.sanbi.org).