Home » GENERA M-O » Othonna » Othonna triplinervia
Back to Category Overview
Total images in all categories: 11,451
Total number of hits on all images: 6,213,912 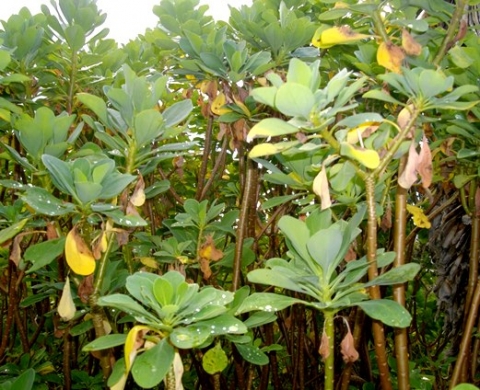 Othonna triplinervia is a sparsely branching shrub that grows to heights from 50 cm to 2 m. The brittle, erect stems are green when young, becoming olive green to pale brown later.

Flowerheads grow in lax stem-tip corymb-shaped inflorescences. The flowerhead becomes about 3 cm in diameter, comprised of (about) five narrow ray florets and a smallish disc, all yellow but the disc darker. Flowering happens from midsummer through autumn.

This plant is endemic in the Eastern Cape where it grows near the coast and inland, from Uitenhage to Bathurst and Bedford. The plant is found in succulent scrub, thicket and karoid veld, often on dry, south-facing hills. The species is not considered to be threatened in its habitat early in the twenty first century (Gledhill, 1981; http://pza.sanbi.org; www.redlist.sanbi.org).