Home » GENERA M-O » Othonna » Othonna parviflora
Back to Category Overview
Total images in all categories: 11,411
Total number of hits on all images: 6,178,374 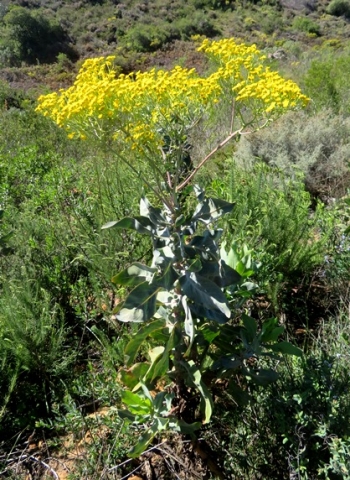 Othonna parviflora, commonly known in Afrikaans as bobbejaankool (baboon cabbage) and previously as O. amplexicaulis, is a robust but short-lived shrub reaching 2 m in height.

New growth may produce stem-tip leaves greener than the mature ones. The leaves are large, the bracts on flower stalks small.

The distribution is mainly in the Western Cape from Clanwilliam to Humansdorp in the Eastern Cape and slightly northwards into the Northern Cape. The photo was taken on the Piketberg Mountain.

The habitat is fynbos on seasonably damp sandstone slopes and in places where the vegetation has been disturbed. Fire in the wrong season may cause a proliferation of these plants. The species is not considered to be threatened in its habitat early in the twenty first century (Vlok and Schutte-Vlok, 2010; Manning, 2007; Bond and Goldblatt, 1984; iNaturalist; http://redlist.sanbi.org).