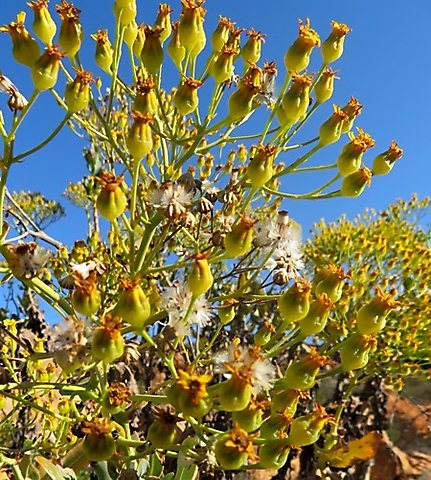 When Othonna parviflora flowerheads progress into fruiting, the heads contract at the top into urn-shape. Some yellow of fading ray florets is still visible above the green involucres, later to turn brown before disappearing.

Some enlarged, white pappus appendages are already being freed from the clasp of their involucres, heralding the next developmental stage. Of the large amounts of seed set annually, only a small percentage reaches germination, even in conditions of excessive fires when these plants tend to proliferate.

The veld deteriorates (from a farmer's viewpoint), when such unpalatable species replace the better fodder plants (Vlok and Schutte-Vlok, 2015; Manning, 2007).