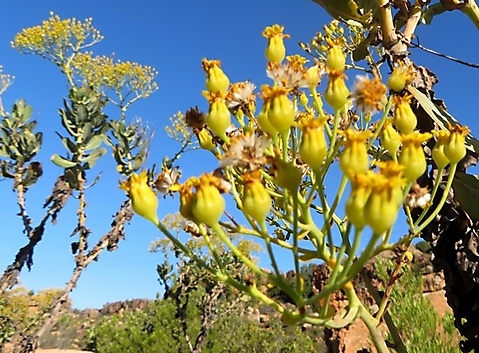 Othonna is a genus of shrubs and perennials in the Asteraceae family. Some of these plants are commonly called bobbejaankool (baboon cabbage) in Afrikaans. Some species are succulent or slightly so, some with thickened rootstocks. The plants are usually hairless, but may be woolly in the axils.

The leaves are alternate, sometimes growing from the base. Some species have stalked leaves, the leaf-shape varying from narrow to nearly round, the margins entire to toothed, sometimes pinnate (compound).

The flowerheads may grow at stem-tips or from leaf axils, solitary or in corymbs or panicles, on short to long peduncles. The involucres are cup-shaped to bell-shaped, consisting of one row of bracts that are joined at the base and hairless. In some species these bracts have membranous margins.

The many-flowered heads may comprise ray florets, as well as disc florets, or only the latter. The outer rings of disc florets are sometimes female, the flowerheads then called disciform instead of discoid. The receptacle is flat or convex at the flowerhead base, smooth and lacking scales.

The ray florets are female or bisexual, coloured yellow, white, purple or pink. The small, disc florets are male and tubular with yellow or white, five-lobed corollas.

The fruits are ellipsoid and ribbed, sometimes hairy with a persistent crown of rough-surfaced bristles.

The genus consists of 120 species occurring in Africa, most of them in southern Africa.