Home » GENERA M-O » Othonna » Othonna hederifolia
Back to Category Overview
Total images in all categories: 11,638
Total number of hits on all images: 6,757,235 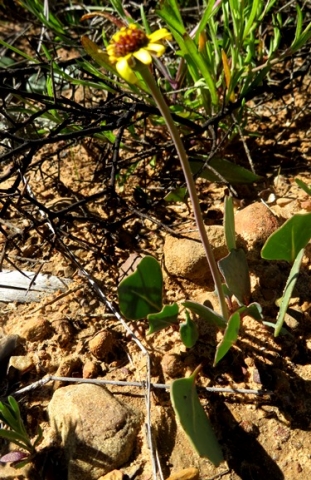 The leaves of this plant suggest that it may be Othonna hederifolia, but the flowerhead should then be uniformly yellow. The photo was taken at Matjiesfontein near Nieuwoudtville during August.

O. hederifolia is a tuberous perennial growing solitary flowerheads on erect, naked scapes of 3 cm to 17 cm. The tuber is up to 2,5 cm wide and 10 cm long.

O. hederifolia grows in a restricted distribution in the Northern Cape and Western Cape from Van Rhynsdorp to the Nieuwoudtville plateau. The habitat is granitic sandy soil in rocky places. It is not considered to be threatened in its habitat early in the twenty first century.

O. cuneata found in Namaqualand and flowering late winter to early spring has a tuber, somewhat similar leaves and pink-purple flowerheads, the rays as well. O. wrinkleana and O. cacalioides have leaves with similarities but are unlikely matches for the plant in picture. The colour of the flowerhead disc is not typical of Othonna at all (Bond and Goldblatt, 1984; iNaturalist; www.llifle.com; http://redlist.sanbi.org).