Home » GENERA M-O » Othonna » Othonna dentata flowerheads young and old
Back to Category Overview
Total images in all categories: 11,905
Total number of hits on all images: 7,155,746 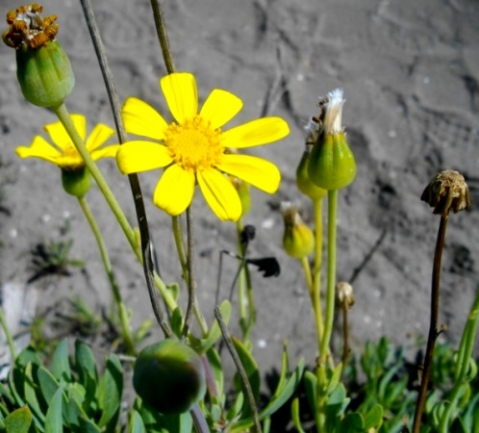 Flowering in August near Vermont, this Othonna dentata plant has flowerheads in several stages of development at the top of long bare scapes.

A bud appearing round from the top has to be viewed from the side as well to appreciate its shape. The open flower spreads its (in this case) eight yellow ray florets around its disc. The disc has already opened its outer florets, the central ones still to come. The single row of green involucral bracts around the base of each flowerhead are joined, vertical, grooved pleats present where they meet.

On old flowerheads the tips of the green bracts tighten around the developing seeds, shrinking the head gradually as it turns into a fruit. Once dry, the involucre and stalk turn brown, looking dead. The seed everything but dead, prepare to depart if they have not done so yet (Mustart, et al, 1997; Bean and Johns, 2005; Burman, 1985).