Home » GENERA M-O » Othonna » Othonna coronopifolia fulfilling a contract
Back to Category Overview
Total images in all categories: 12,068
Total number of hits on all images: 7,360,634 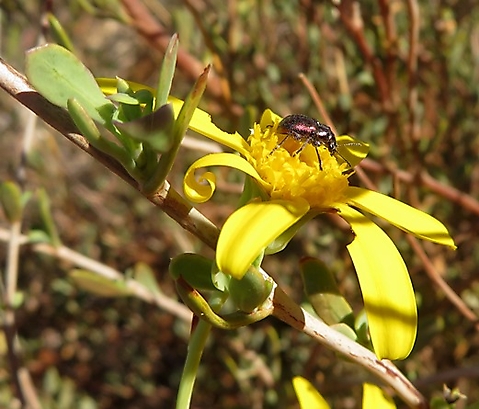 Previous
Image 4 of 85
Next

It is clear from the photo how a beetle collects and deposits pollen grains among Othonna coronopifolia disc florets, using six feet while fully focussed on eating. A bit like a hiker collecting and losing dust particles from his boots on a mountain trail, totally oblivious of the nano-events he is causing.

Ray florets may be variously curled back in the same flowerhead, usually strongly at night. Ray and disc florets are both bisexual.