Home » GENERA M-O » Othonna » Othonna coronopifolia
Back to Category Overview
Total images in all categories: 11,662
Total number of hits on all images: 6,774,724 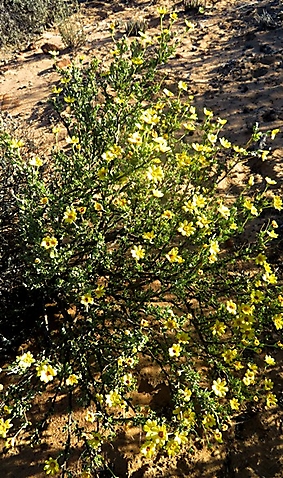 Previous
Image 1 of 84
Next

Othonna coronopifolia, commonly known in Afrikaans as sandbobbejaankool (sand baboon cabbage), is a pale-stemmed shrub reaching heights from 1 m to 2 m. Old stems are pale grey and woody, younger ones may be dull red-brown or purplish, even creamy yellow on new growth among the leaves.

The species distribution is in the Western Cape, mostly near the west coast and the southwest of the Northern Cape. The photo was taken at Kagga Kamma.

The habitat is coastal dunes and sandy places on rocky sandstone and granite slopes. The species is not considered to be threatened in its habitat early in the twenty first century (Manning 2007; Manning and Goldblatt, 1997; Bond and Goldblatt, 1984; iNaturalist; JSTOR; http://redlist.sanbi.org).