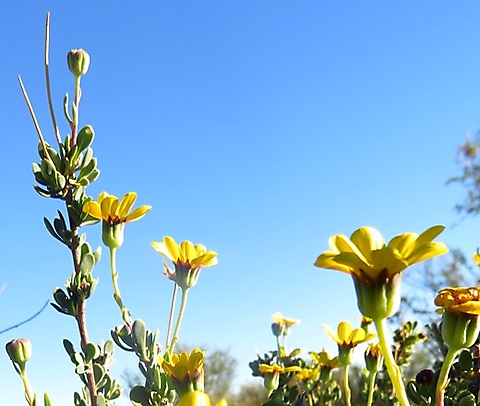 Previous
Image 5 of 84
Next

The peduncles of the Othonna coronopifolia flowerheads on this plant are of moderate length only and not naked. They bear small, narrow leaves. Some plants of the species have no leaves on peduncles that may also be longer than seen here.

Although differently shaped, these peduncle leaves alternate and ascend, similar to the normal leaves of the plant, but they reduce in size rapidly upwards and disapppear close to the involucre, where the peduncle is bare.

The bases of the ray florets in picture lie upon the red-brown, pointed tips of the bracts and are forced outwards.

The flowerheads of this plant often grow solitary, occasionally appearing in small groups.