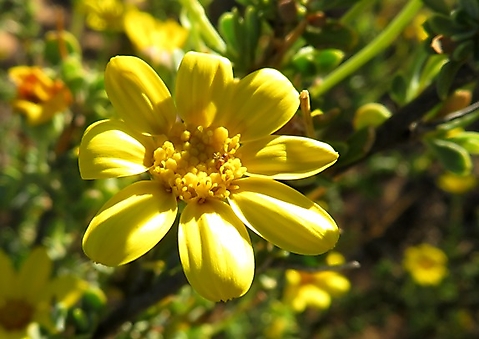 Previous
Image 2 of 84
Next

The disc florets start opening from the perimeter as daisies generally do, each tiny, tubular floret ending in five pointed lobes. The centre of the disc in picture has numerous globose bud tips still to open later, when the outer ones are done

Male and female floral parts, with anthers and stigmas uppermost, are offered above the corollas for pollinating insects to touch. The transfer of value for flowers lies in simple touching. Its requirements are, however, quite particular, achieved by numerous trials, like getting infected by a virus (Manning 2007; Manning and Goldblatt, 1997; Bond and Goldblatt, 1984; iNaturalist; JSTOR).