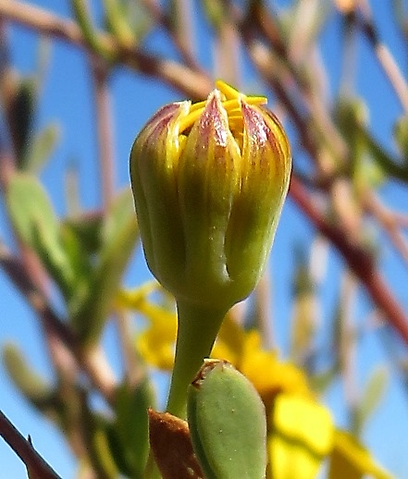 Previous
Image 7 of 85
Next

The Othonna coronopifolia flowerhead grows from a stem-tip, a cup-shaped involucre forming its base.

The smoothness of the pale green peduncle of the flowerhead continues upwards across the receptacle onto the involucral bracts. These obovate, acutely pointed bracts are joined low down, separate at their tips, forming a single ring around the florets.

When the flowerhead opening is imminent, the bracts cohering around the florets lose centre stage in the flowering event. Their tips are getting pushed aside by the burgeoning ray florets. The visible parts of the elongating rays in picture are now still narrow, the limbs of the yellow blades folded longitudinally

At this stage, however, the bracts still appear quite floral, not only supportive. Their dull green colouring low down is replaced in their widest, middle parts by faint brown stripes that become deeper-hued and glossy at the tips. Whitish membranous extensions are visible on the bract-tip margins. On some plants of the species the bract colouring is pale green throughout (Manning 2007; Manning and Goldblatt, 1997; Bond and Goldblatt, 1984; iNaturalist; JSTOR).