Home » GENERA M-O » Othonna » Othonna coronopifolia flowerhead
Back to Category Overview
Total images in all categories: 12,068
Total number of hits on all images: 7,360,726 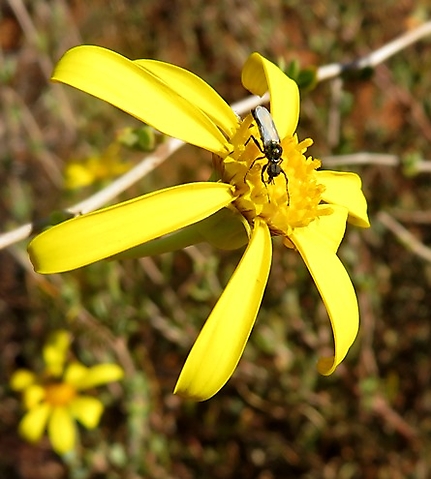 Previous
Image 3 of 85
Next

This flowerhead of Othonna coronopifolia, yellow as always in ray as well as disc florets, appears in full welcoming mode on a sunny day.

The rays do not only spread but recurve. The central disc appears to be thrust upwards as the rays bend back. The first open disc florets of the outer ring already spread their pointed petal lobes.

There are eight ray florets in this flowerhead, a fairly common number for heads of the species. The exserted floral parts maximise the probability that insect dancing or strolling upon them will deliver a pollen grain on a stigma in enough instances for a successful seed set by the head.

Flowering happens from winter through spring, the photo taken in September.