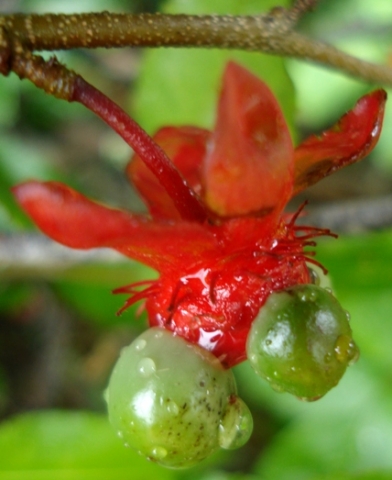 The red stalk of an Ochna serrulata flower morphing into its fruiting stage is about 1,5 cm in length. Whitish lenticels are visible on the olive green branchlet in the photo.

The ring of red wiry protrusions arranged around the fruit at the perimeter of the receptacle are the remains of the stamens that used to be yellow when there was still a flower (and when the style and stigma were still pale greenish yellow). The (also) yellow petals that drop off early in this species were arranged in a ring outside the stamens.

Pretty and admired as this plant may be when flowering in its habitat, the species is an ecological headache in Australia (and New Zealand), where it has become invasive. This is just one of the pests we have bestowed on those countries in exchange for some Hakea and Acacia species from down under that South Africans battle with.

The plant is still loved and cultivated in Hawaii… invasiveness of alien species being a lottery phenomenon not anticipated before it is too late: be careful about visas for Martians (iSpot; Coates Palgrave, 2002; Wikipedia; www.plantzafrica.com).