Home » GENERA M-O » Ochna » Ochna pulchra fruit and sepals
Back to Category Overview
Total images in all categories: 11,276
Total number of hits on all images: 5,987,730 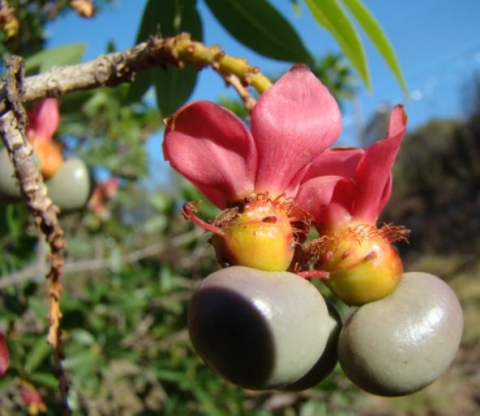 Ochna pulchra is a deciduous shrub or small tree reaching heights between 3 m and 7 m.

Clusters of sweetly scented, creamy flowers appear from late winter and throughout spring. The green, kidney-shaped fruit in picture turn black as they ripen, adorned by the persisting pink or red sepals.

The tree is found over a large area in South Africa’s northern provinces beyond the Vaal River, as well as in neighbouring countries such as Zimbabwe, Namibia, Botswana, Zambia and maybe further afield in tropical Africa.

It grows in sandy soils, in quartzite or granite hills and slopes of sourveld or mixed bushveld at medium altitudes. The species is not considered threatened in its habitat early in the twenty first century (Schmidt, et al, 2002; www.plantzafrica.com; www.redlist.sanbi.org).