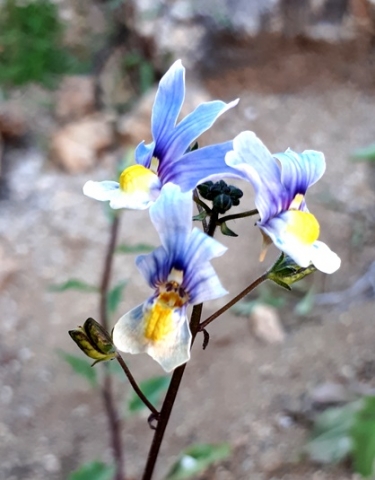 The flowers of Nemesia versicolor grow in racemes of up to 8 cm long from upper leaf axils. While the leaves at the stem-base are opposite, the small upper leaves or bracts subtending the flower stalks in the raceme are alternate.

The upper flowers have shorter pedicels, those of the lower ones up to 2,5 cm long. The calyx is five-lobed, the small lobes narrow and pointed.

The corolla is two-lipped and five-lobed. The lower lip is broad, more so at its tip indented in its centre. The upper lip is four-lobed, the rounded tips of its erect, oblong lobes separated in their top halves. The short corolla tube has a single almost straight spur of 4 mm in length at its back. The spur is narrowly cylindrical at its tip, funnel-shaped where it joins.

The corolla colouring is highly variable. The paired upward bulges at the base of the lower lip may be yellow or orange, sometimes white. The upper lip may be white with blue or dark blue at the base or more widely; the lower lip often mainly white. On other plants the whole corolla may be sulphury yellow or pinkish; or those colours may occur on one lip only, the other white. Other colour combinations and permutations should not come as surprises.