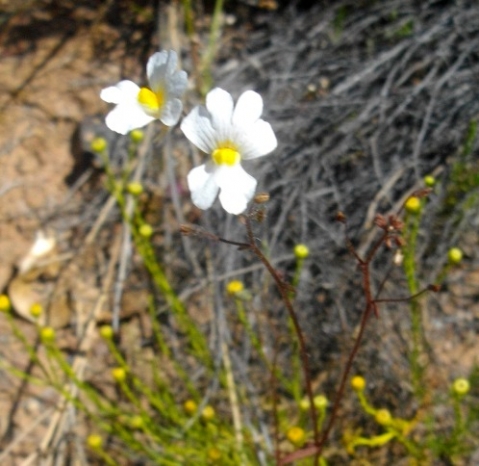 This white form of Nemesia fruticans was seen in October in the Rooiberg between Van Wyksdorp and Calitzdorp. Differences as to the flowering time of this species are reported, maybe related to region. It is also possible that some flowering takes place at any time of year, given the large distribution of the plant in both summer and winter rainfall areas and the diversity of the terrain in which it is established.

The Afrikaans common name of witleeubekkie (white snapdragon) matches the colour of this specimen although pink and mauve ones also occur and the name mauve nemesia also exists.

Another Afrikaans name, maagpynblommetjie (little stomach ache flower) is confusing, as no indications could be found in the available literature of medicinal uses. Does it cause of relieve such aches? Finding someone who has eaten some, even in the interests of science, may take time.