Home » GENERA M-O » Nemesia » Nemesia fruticans
Back to Category Overview
Total images in all categories: 10,596
Total number of hits on all images: 5,234,577 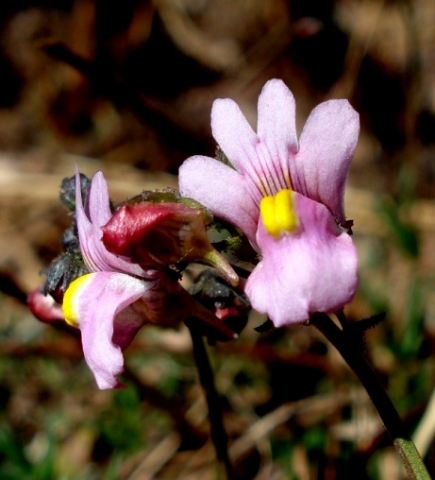 Previous
Image 9 of 23
Next

Nemesia fruticans, the common wild nemesia or in Afrikaans the wilde leeubekkie (little wild lion's mouth), is a shrublet growing many erect, slender stems to heights of about 40 cm from a woody taproot.

There is a fine line, or more appropriately a grey area between herbs and shrubs as with many biological borders among evolved species. This plant is on the herb-shrub border or in it. Artificial human categories to facilitate learning, useful as they may be, mean nothing to plants and are not respected by the natural diversification processes in the continuous evolution of species. Border areas may vanish as species "clarification" gradually lose them by no more plants grow that represent them anymore.

The flowers of N. fruticans may be pink, lilac, mauve or white. The flowers are two-lipped. The upper lip has four oblong lobes with rounded tips, resembling short fat fingers. There are dark, narrow, vertical lines from the base of the upper lip. The lower, two-lobed lip has bright yellow markings at the base on two oblong mounds. This lip has an irregularly rounded margin that may be partly curved under.

The almost cylindrical spur at the back of the flower points obliquely downwards and tapers slightly towards its tip. It becomes about 4 mm long.

Flowering happens towards the end of winter and in spring.

The fruit capsule that follows a successful flower is laterally compressed and two-chambered.

The species occurs on stony slopes from southern to north-eastern parts of South Africa and in several of the neighbouring countries in southern Africa. The photo was taken in the Melville Koppies at the beginning of August.

The species is not considered to be threatened in its habitat early in the twenty first century (Manning, 2009; Van Wyk and Malan, 1997; www.redlist.sanbi.org).