Home » GENERA M-O » Microloma » Microloma namaquense
Back to Category Overview
Total images in all categories: 9,580
Total number of hits on all images: 4,308,796 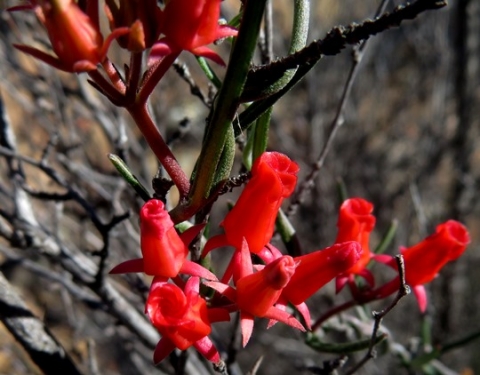 Microloma namaquense, in Afrikaans commonly known as Namakwakannetjies (little Namaqua cans), is a slender, twining perennial growing curving and curling branches. They are grey to purplish brown and faintly hairy.

The genus is commonly referred to as wax creepers. Microloma forms part of the Apocynaceae or milkweed family but the sap of its plants is clear.

This species is endemic to the Northern Cape where the plants grow in Namaqualand in the region between Steinkopf, Springbok and Komaggas. This plant was photographed at Naries west of Springbok on the road to Kleinzee.

The habitat is succulent Karoo, the plants growing in arid shrubland in rocky, shale-derived soils. The species is not considered to be threatened in its habitat early in the twenty first century (Manning, 2009; Le Roux, et al, 2005; Eliovson, 1990; http://redlist.sanbi.org).