Home » GENERA M-O » Microloma » Microloma calycinum flower
Back to Category Overview
Total images in all categories: 9,580
Total number of hits on all images: 4,308,886 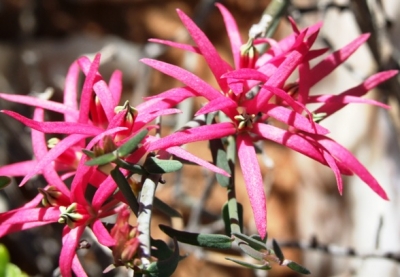 Microloma calycinum is a twiggy shrublet with clear sap. It has drooping, opposite leaves that are narrowly oblong. The pink or red flowers in small clusters have long, narrow leaves with pointed tips. Flowering happens in winter and the first half of spring.

Microloma is a member of the Apocynaceae or milkweed family.

The species is distributed in nature in the Richtersveld, Namaqualand and southern Namibia. The photo was taken near Springbok.

The habitat is dry, stony flats and slopes. Germination happens in winter, the rainy season. The species is not considered to be threatened in its habitat early in the twenty first century (Manning, 2009; http://redlist.sanbi.org).