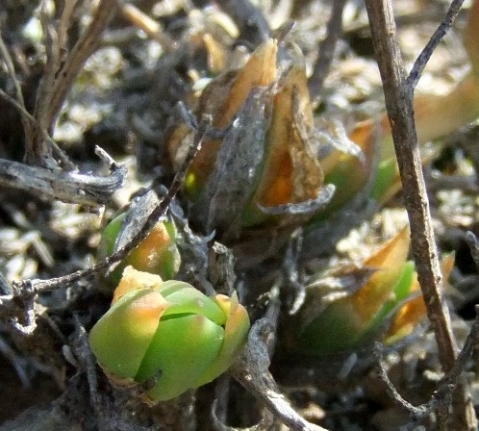 Mesembryanthemum tortuosum, previously and sometimes still known as Sceletium tortuosum, is a sprawling succulent herb growing to 30 cm in height from an underground caudex. Its slender, trailing branches may become 20 cm long.

The pale green leaves are keeled on the outside, concave on the inside and thickly fleshy with succulence. They are mostly carried in erect positions on the plant. Leaf shape is ovate with an acutely pointed tip. They become 4 cm long and 1 cm wide, growing in opposite pairs.

Some dried old leaf husks are still remaining on the plant in the photo from the previous season.

The species distribution is in the Western Cape, the Eastern Cape and the Northern Cape, from Namaqualand to the Little Karoo and inland to Aberdeen.

The habitat is arid and semi-arid, karoid terrain. The plant often grows in the shade of taller plants in habitat, as the one in picture is doing. It is not considered to be threatened in its habitat early in the twenty first century.

The plant is browsed by livestock and game (Vlok and Schutte-Vlok, 2010; iSpot; http://redlist.sanbi.org).