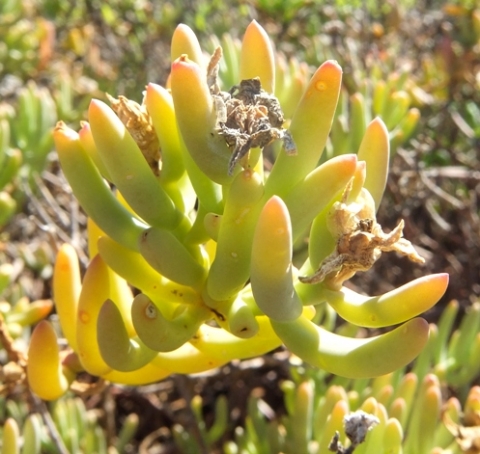 Mesembryanthemum splendens, in Afrikaans the donkievygie (donkey mesemb), should maybe officially be called Phyllobolus splendens, the situation apparently unresolved as yet.

Resolving naming issues in Botany doesn’t last too well, whenever information about a plant's ancestry is still incomplete. And when do people ever know everything? Botanical names evolve in a manner not fully Darwinian. Punctuated by discrete events of committee resolutions and academic publications, the direction of development follows the drift of trends in available information transformed into agreed choices. Knowledge lasts in packaged format until people get better ideas.

The Leviathan constituted by collective human knowledge grows semi-predictable limbs from the meristems of curiosity. It savours new insights, but retains politically correct residuals through committee filters managed by the science bureaucracy.

One of the longer lists of synonyms one might chance to see for a scientific plant name, i.e. previously used names now discarded by the botanists that know, is given for this plant in www.redlist.sanbi.org.

And then the people who don’t know science went along and named the poor plant for the donkey! Could the leaf pairs resemble ears? Identity crises in upheavals of nomenclature don’t affect plant well-being. Give them care in the garden, don’t harm them in nature and they’ll be right as rain… even during drought, if they’re succulent as this one.

The donkievygie is not endangered under any alias in its habitat early in the twenty first century, growing stable populations from Namaqualand to the Little Karoo (Vlok and Schutte-Vlok, 2010; www.redlist.sanbi.org).