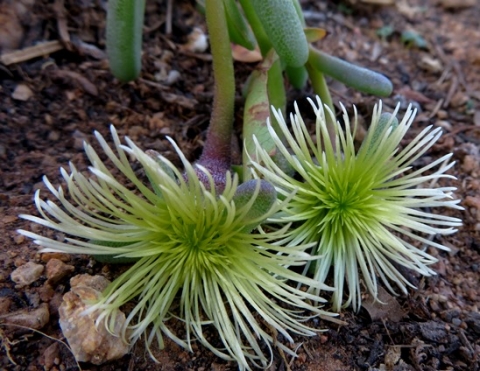 Mesembryanthemum prasinum identity is uncertain. So is the identity of the plant in picture. The two possibly belong together.

Some call this plant Phyllobolus prasinus, a plant that had in the past several names in each of the Aridaria, Nycteranthus and Sphalmanthus genera. There is a photo under that name (P. prasinus) on this Site but only leaves are shown covered in conspicuous water cells. The plant in picture may lack such cells unless they are very small, the leaf surfaces here only appearing finely mottled.

This photo was taken in August 2018 in the Hester Malan Succulent Garden in the Goegap Nature Reserve. It was presented there as Phyllobolus with Mesembryanthemum added in brackets.

The SANBI Redlist website places P. prasinus in a small distribution in the west of Namaqualand, while not recognising M. prasinum at all. The iNaturalist site lists the plant as M. prasinum but with lack of confirmation of identity (Smith, et al, 1998; Herre, 1971; iNaturalist; http://redlist.sanbi.org).