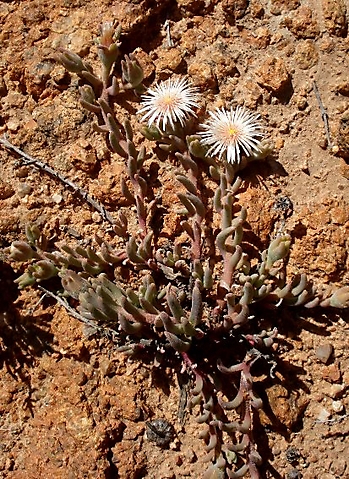 Mesembryanthemum oculatum is a prostrate, branched perennial, a leaf succulent spreading as much as 75 cm in diameter. By 2000 it was still called Phyllobolus oculatus and not too long before that Sphalmanthus scintillans.

The species distribution is in the Northern Cape and southern Namibia.

The habitat is arid or semi-arid, sandy, coastal flats and granitic slopes. The species is not considered to be threatened in its habitat early in the twenty first century (Le Roux, et al, 2005; Smith, et al, 1998; Herre, 1971; iNaturalist; http://redlist.sanbi.org).