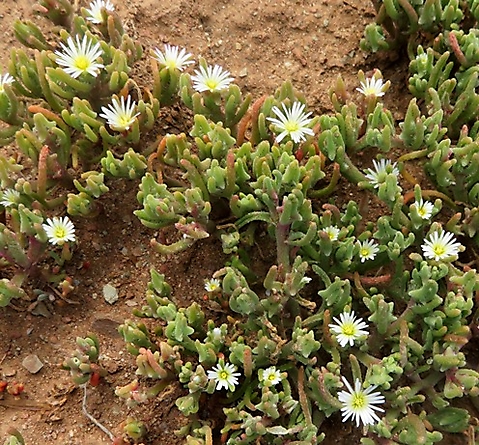 The opposite leaves clasp the slender stems slightly. The succulent leaves are linear, cylindrical or nearly so and rough-surfaced from a conspicuous covering of large, rounded bladder cells. The upper leaf surfaces may be shallowly channelled. Leaf colours vary from pale green to yellow-green and occasionally reddish. Leaf dimensions are about 2 cm long and 2 mm wide.

The South African distribution of the species is in the Western and Northern Cape, from the Namaqualand coastal plain and the Knersvlakte as far as the Little Karoo. The photo was taken west of Barrydale. Also in Namibia, these plants occur much further afield in nature, as far as the Middle East and southern Europe. In addition, they are naturalised as invasive weeds in South Australia, southern parts of the USA and on some islands.

The habitat is sandy flats among karoid scrub. It is no surprise that the species is not considered to be threatened in its habitat early in the twenty first century (Le Roux, et al, 2005; iNaturalist; Wikipedia; http://flora.sa.gov.au; http://redlist.sanbi.org).