Home » GENERA I-L » Lasiosiphon » Lasiosiphon deserticola
Back to Category Overview
Total images in all categories: 11,506
Total number of hits on all images: 6,514,514 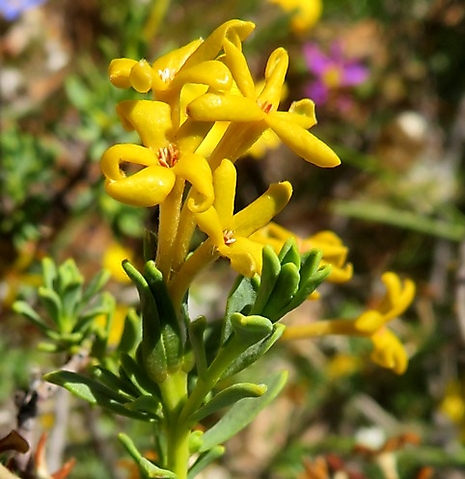 Lasiosiphon deserticola, commonly known as the saffron curryflower, in Afrikaans as saffraan or verfbossie (little paint bush) and scientifically previously as Gnidia deserticola, is an evergreen, loosely branched, twiggy shrub or shrublet growing from a single stem.

The species distribution is mainly inland in the Western Cape, from the Bokkeveld Escarpment to Worcester and eastwards to the Little Karoo and Great Karoo as far as Willowmore and Graaff-Reinet. The plant's range extends only slightly into the Northern Cape and the Eastern Cape. The photo was taken in the Biedouw Valley.

The habitat is dry, sandy flats and lower to middle slopes in succulent Karoo, Nama Karoo and fynbos. The specific epithet, deserticola, a Latin word meaning living in a desert may take the arid feature a bit far. Although the plant may suffer from overgrazing in the veld where it grows naturally, it is not considered to be threatened in its habitat early in the twenty first century (Vlok and Schutte-Vlok, 2015; Shearing and Van Heerden, 2008; Manning and Goldblatt, 1997; Bond and Goldblatt, 1984; iNaturalist; http://pza.sanbi.org; http://redlist.sanbi.org).