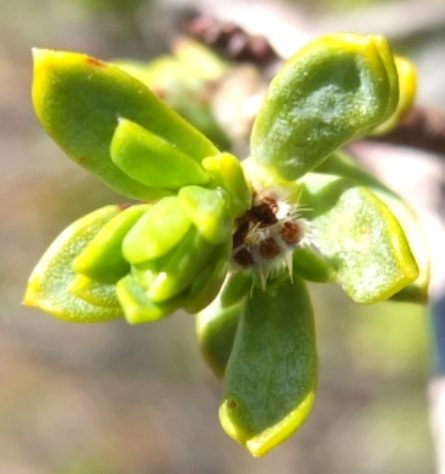 The ochre-orange flowers of Lasiosiphon deserticola, a plant commonly known as saffraan (saffron), are still used as a dye for leather or wool.

This is another case of an existing name, saffron, finding a new job: The word is remembered vaguely but sufficiently for some lingering resemblance to kindle a memory and the name to be used. The mere presence of the original plant, real owner of the name, in the environment where this faulty recognition event takes place, would constitute sufficient objection to the travesty and prevent the identity theft. Not being there to defend itself and since plants lack law courts, the deed is done. The minor confusion is endured into perpetuity, or until a new whim creeps into the language of every day.

One of the strengths of language lies in the fact that oft spoken errors work as well in the thrust for new forms gaining legitimacy as the claims issuing from the grammatically correct versions of yesterday. Creative surges in language renewal beat pernickety obsessions with purity and accuracy. The living language does use clerks but does not consider them to be royalty.

The remains of the withered head in picture persisted to autumn, the April photo taken near Oudtshoorn (Vlok and Schutte-Vlok, 2010; iSpot; JSTOR).