Home » GENERA I-L » Lapeirousia » Lapeirousia verecunda
Back to Category Overview
Total images in all categories: 8,897
Total number of hits on all images: 3,867,334 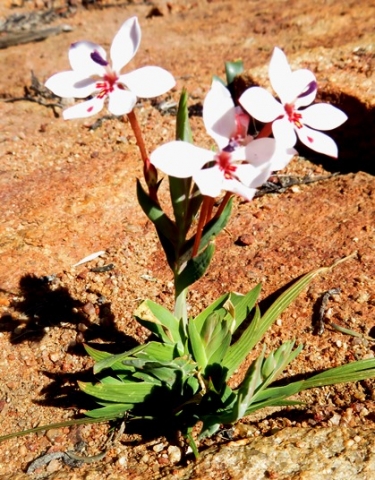 Lapeirousia verecunda is a perennial geophyte growing deciduous above-ground leaves and inflorescences annually from its corm. The short stem may branch at ground level.

A few, narrow, ribbed, straight leaves spread near the ground, below the broader, shorter leaf-like green stem-bracts, some with hook-like tips.

The species is endemic to the northern Cape, restricted to a small Namaqualand distribution in the Spektakelberg escarpment region west of Springbok. The photo was taken at Naries, near to and north of Spektakelberg.

The plant’s habitat is shale shrubland where it grows mainly in granitic, rocky and sandy soils. The species is considered to be vulnerable in its habitat early in the twenty first century due to road works, quarrying and crop farming (iNaturalist; www.pacificbulbsociety.org; http://redlist.sanbi.org).