Home » GENERA I-L » Lapeirousia » Lapeirousia verecunda flowers
Back to Category Overview
Total images in all categories: 9,385
Total number of hits on all images: 4,216,784 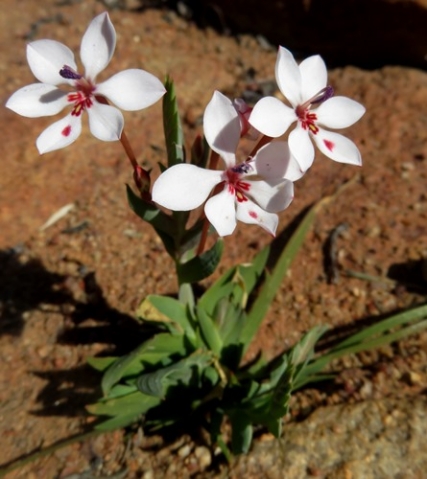 Lapeirousia verecunda produces a few flowers growing solitary from the axils of the broad, green stem-bracts.

The corolla tube is long and thin, ending at the top in the flower mouth where the six tepals spread widely. The three white upper tepals of the two-lipped flower are slightly larger than the lower ones and unmarked. They are paddle-shaped, clawed at the base, shallowly concave above with pointed tips.

The lower three tepals each has a pair of parallel, reddish purple line markings at the base, slightly larger on the central tepal that also has a purple blotch near its centre. There is usually some yellow between the parallel lines. Some plants have smaller central blotches on the lateral tepals of the lower lip as well.

The style and stamens are erect in the flower centre. The anthers are oblong, the stigma three-branched, each branch ending in a two-pronged fork.

The long flower tube prevents many insects from benefiting from the plant’s favours, the nectar only reached by certain long-proboscid flies taking care of pollination (iNaturalist; www.pacificbulbsociety.org; http://redlist.sanbi.org).