Home » GENERA I-L » Lapeirousia » Lapeirousia silenoides flower
Back to Category Overview
Total images in all categories: 9,754
Total number of hits on all images: 4,378,496 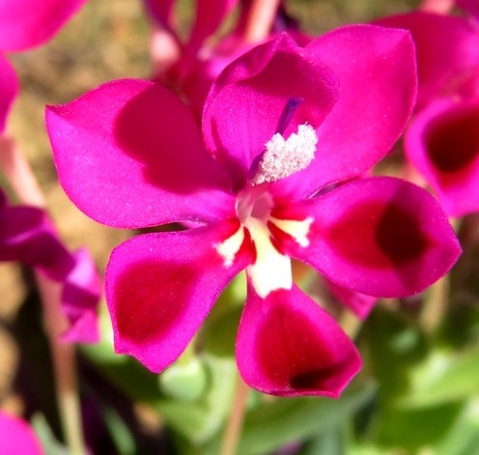 Lapeirousia silenoides bears numerous flowers, erect and close together. They grow in a spiralling spike on the branched or unbranched stem, each subtended by a leafy green bract.

The long white, pinkish and soft, translucent corolla tube ends in a narrow mouth. This is where the six carmine, magenta or cerise tepals separate and spread in a two-lipped flower not easily missed. The flower tube is from 3 cm to 5 cm long.

The spoon-shaped tepals of the lower lip have creamy yellow markings near the base and darker central patches in the hollows of their rounded upper parts. The three tepals of the upper lip are unmarked, similarly shaped.

The stamens are erect under the upper tepal, the oblong, white, granular to brush-like anthers positioned lower than the stigma. The thread-like, blue-purple style tip is not yet showing the three branches of the stigma that will curve and appear hairy when fully developed (Le Roux, et al, 2005; Eliovson, 1990; Leistner, (Ed.), 2000; iNaturalist; www.pacificbulbsociety.org).