Home » GENERA I-L » Lapeirousia » Lapeirousia silenoides
Back to Category Overview
Total images in all categories: 8,960
Total number of hits on all images: 3,972,355 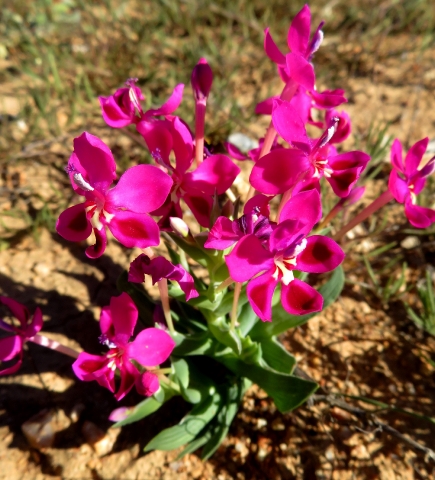 Lapeirousia silenoides is commonly known as Springbok painted petals, in Afrikaans as meidestert (wench’s tail) and previously in botany as L. speciosa. The plant is a cormous perennial, the bell-shaped corm bearing a woody coat. The roots emerge from the edge of the corm's flat base. The deciduous above-ground parts of the plant annually reach heights from 5 cm to 12 cm.

The species is endemic to the Northern Cape, found from north of Springbok to Garies. The photo was taken at Naries, west of Springbok.

The plant grows among granite outcrops of the Namaqua Klipkoppe (stone heads), from crevices of the boulders and the sandy soil around them. The species is not considered to be threatened in its habitat early in the twenty first century (Le Roux, et al, 2005; Eliovson, 1990; Leistner, (Ed.), 2000; iNaturalist; www.pacificbulbsociety.org; http://redlist.sanbi.org).