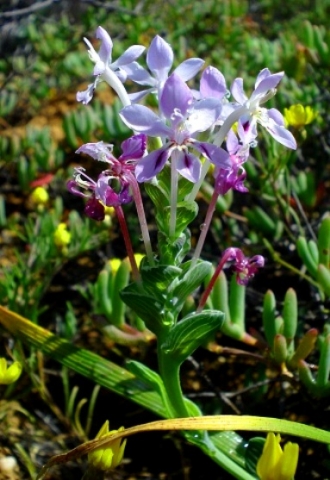 The lower three tepals, the flowers being two-lipped, have contrasting colour markings in each case: On subsp. pyramidalis these markings are dark (often purple if they are present), with fuzzy margins and positioned on the central axis of the tepals. On the darker tepals of subsp. regalis the markings are white with sharply contrasting margins, positioned at the tepal margins.

The long leaf at the base of the plant in picture contrasts against the short, rounded and folded floral bracts up the flower stalk. The leaf is narrow with a ribbed surface.

This plant grows from the south of Namaqualand through the Tanqua Karoo to the Little Karoo and the Overberg.

Several of the Lapeirousia species of South Africa are commonly called kabong, the name that Khoi and or San tribes of South Africa's early history named these plants. The bell-shaped corms featured in the diets of (at least some of) those hunter-gatherer tribes.

Food and medicine plants tend to be named by human society, as do all environmental features that impact upon the lives of people. Today all living things merit names and study, as humanity has become aware of biological diversity itself. All the living species on earth are important to each other in the mutual interdependence of species for their continued existence, interactively and collectively.

While people do not value weeds or vermin, we are part of one interlinked ecology. Our many (and some yet unknown) service providers in nature may have some needs serviced in turn by creepy or crawly things we do not value or see the need for; things that should therefore not be exterminated simply because we have dislikes (www.pacificbulbsociety.org).