Home » GENERA I-L » Kalanchoe » Kalanchoe beharensis
Back to Category Overview
Total images in all categories: 9,569
Total number of hits on all images: 4,299,514 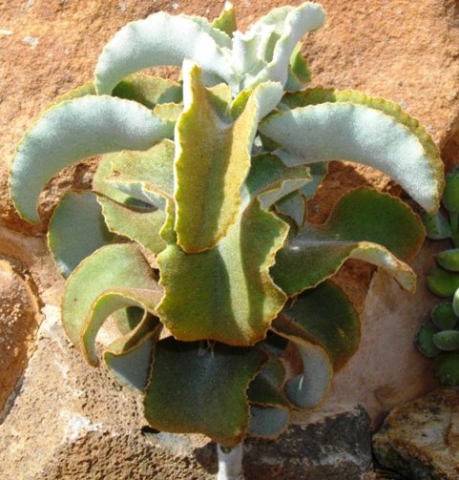 Kalanchoe beharensis is a sought after succulent plant of Madagascar, increasingly seen in South African horticulture. The genus of Kalanchoe, belonging to the Crassulaceae family, has been described as cosmopolitan. This is so because some Kalanchoe species are indigenous to parts of the earth as far apart as South Africa, Mexico, the north Atlantic islands of Macaronesia and the Himalayas.

K. beharensis has thick, curving, succulent, triangular to lanceolate leaves covered in brown hairs. The leaves grow on branched stems into a shrub of 3m to 5 m. Small yellow-green flowers appear in winter. The leaf and stem hairs brought about the common name of felt plant, while the leaf shape gave rise to the name of elephant’s ear. The specific epithet of beharensis refers to Behara in Madagascar, a region where the plant grows in nature (Wikipedia).