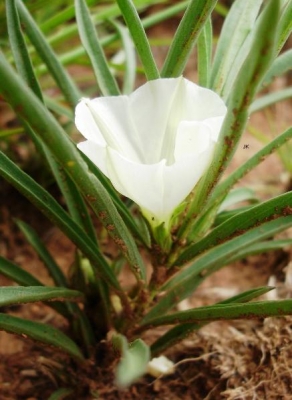 I. simplex grows solitary trumpet-shaped flowers from leaf axils with pale cream to almost white corollas. The fruit is a smooth, globose to ovoid capsule. The seeds are dark-brown and slightly hairy.

The species distribution is widespread in the central to eastern parts of the country, where it grows in grassland and on rocky ridges. The species is not considered to be threatened in its habitat early in the twenty first century.

The edible tubers are often eaten by rural people, the plant known as wanderer's food.

The best known Ipomoea is surely the sweet potato or I. batatas. Just over 10% of the Ipomoea species occur naturally in southern Africa, several of which have very attractive flowers (Van Wyk and Malan, 1997; Fox and Norwood Young, 1982; www.redlist.sanbi.org).