Home » GENERA I-L » Lobelia » Lobelia anceps
Back to Category Overview
Total images in all categories: 8,988
Total number of hits on all images: 3,989,134 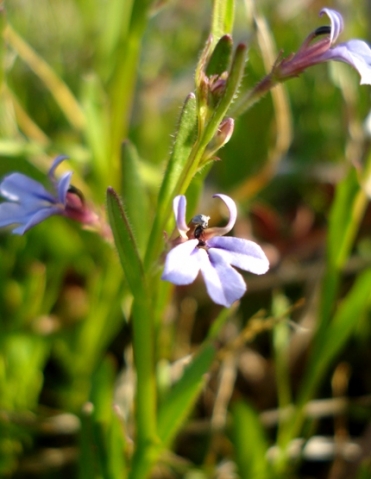 Lobelia anceps is a much-branched, sprawling or erect perennial growing to 60 cm. The thick stems are flattened and narrowly winged.

The species is distributed from the Cape Peninsula in the Western Cape through the Eastern Cape to KwaZulu-Natal and Lesotho.

The habitat is coastal scrub and fynbos in damp, even marshy spots. The species is not considered to be threatened in its habitat early in the twenty first century.

The plant grows from cuttings and thrives in damp conditions as a groundcover (Manning, 2007; Pooley, 1998; www.redlist.sanbi.org).