Home » GENERA I-L » Lachenalia » Lachenalia mutabilis
Back to Category Overview
Total images in all categories: 9,580
Total number of hits on all images: 4,308,757 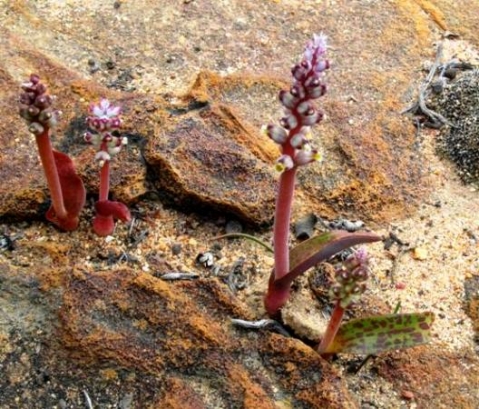 Lachenalia mutabilis is a bulbous perennial, erect and variable, reaching from 10 cm to 45 cm in height. Mutabilis is Latin for variable.

The plant grows only one fleshy leaf angled out from the stem, often with maroon spots and crinkled margins. Some leaves are dark red here without signs of spots, in all cases sheathing the stem and curving up along the margins.

The species distribution lies in a broad swathe along the west coast of South Africa, in the Northern Cape and Western Cape, from Namaqualand to Caledon. These plants ensconced in a sandy rock crevice at Kagga Kamma were photographed in September.

The habitat is sandy and stony slopes among fynbos or succulent Karoo vegetation. The species is not considered to be threatened in its habitat early in the twenty first century (Manning, 2009; Manning and Goldblatt, 1997; www.redlist.sanbi.org).