Home » GENERA I-L » Lachenalia » Lachenalia membranacea
Back to Category Overview
Total images in all categories: 11,018
Total number of hits on all images: 5,656,285 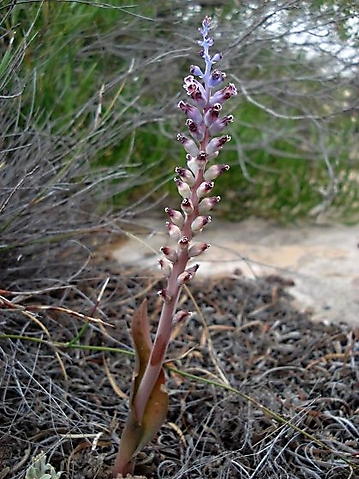 The one or two broad-based, lance-shaped leaves sheathe the stem and taper to bluntly or sharply pointed tips. The leaf colour is dull green to red-brown with scattered dark purple spots.

The species distribution is in the Western Cape and slightly into the Northern Cape, from the Swartruggens Mountains to Nieuwoudtville and the Bokkeveld Plateau.

The habitat is succulent Karoo and fynbos, the plants growing on rocky sandstone slopes and flats in gravelly, clayey soils. The species is not considered to be threatened in its habitat early in the twenty first century (Manning and Goldblatt, 1997; iNaturalist; www.pacificbulbsociety.org; http://redlist.sanbi.org).