Home » GENERA I-L » Indigofera » Indigofera obcordata
Back to Category Overview
Total images in all categories: 8,883
Total number of hits on all images: 3,863,607 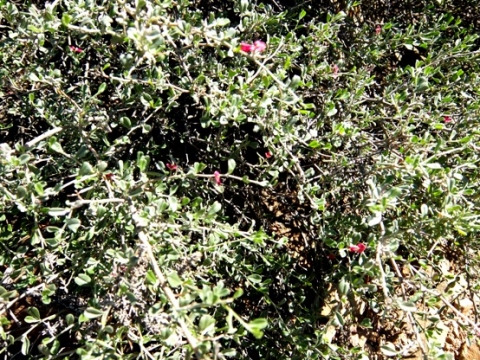 Indigofera obcordata is a shrub growing to heights around 1 m. Old stems are woody and grey, while leaves and upper stems of this palatable species are browsed by stock and game.

The distribution is mainly confined to the Little Karoo, plants growing from the Witteberg near the Anysberg in the west, the Rooiberg in the south to at least Oudtshoorn in the east. The plants grow on stony karoid slopes. This specimen was photographed southwest of Oudtshoorn on the Minwater farm.

The species is stable in habitat, not considered threatened early in the twenty first century. The plant resprouts after heavy browsing (Vlok and Schutte-Vlok, 2010; www.redlist.sanbi.org).