Home » GENERA I-L » Indigofera » Indigofera obcordata flower
Back to Category Overview
Total images in all categories: 9,410
Total number of hits on all images: 4,229,441 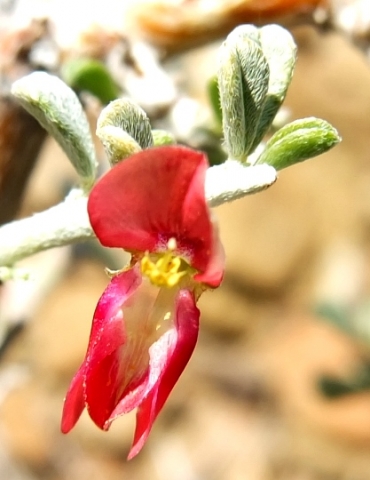 The Indigofera obcordata flower has a banner or standard petal at the top. A pair of drooping wing petals hang free on the flanks of the keel, which consists of the remaining two fused petals. There is a central fold down the banner and a pouch in the keel.

The banner is slightly differently coloured to the lower petals, maybe cerise, while the keel and wings are more pinkish, apart from the white base part inside the keel. The base of the banner also has some white with red dots in the small white patch.

The keel has a fine hairy fringe along its margin. Nine of the ten stamens are bunched together, while the upper one is free.

The silvery haired leaves in the background do not appear to be trifoliolate. They are small and thick with rounded upper margins, bearing out the specific name, obcordata, i.e. inversely heart-shaped. The leaves fold in sharply along their midribs (Vlok and Schutte-Vlok, 2010; iSpot).