Home » GENERA I-L » Indigofera » Indigofera hilaris leaflets pointing up
Back to Category Overview
Total images in all categories: 9,390
Total number of hits on all images: 4,217,964 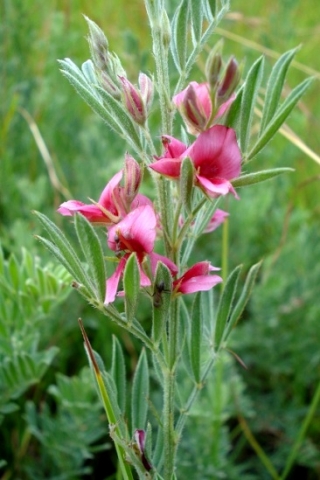 The leaves of Indigofera hilaris are pinnate (compound), with one to four pairs of lateral leaflets as well as a terminal one. The blue-green leaflets are held in a very erect position in the photo. Leaflet shape is narrowly elliptic with whitish, entire margins and acutely pointed tips. Their surfaces are silky, covered in tiny white hairs. Stipules are present at the base of leaf petioles.

The stems of I. hilaris are erect, growing annually to heights around 60 cm from the perennial, woody rootstock (iSpot; Manning, 2009).

(There is another photo of I. hilaris in the Grassland Album under Habitat.)