Home » GENERA I-L » Indigofera » Indigofera heterophylla leaves
Back to Category Overview
Total images in all categories: 8,979
Total number of hits on all images: 3,981,430 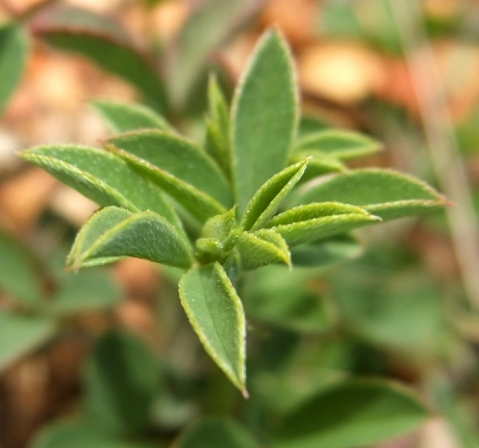 Indigofera heterophylla is usually a sprawling shrublet reaching 1 m in height. While some stems may be prostrate others may be erect. It grows from a single stem and thus does not resprout after fire.

The grey-green leaves are trifoliolate, the leaflets ovate to lanceolate and thinly hairy. There are narrow stipules at the petiole base. Leaflet margins fold in along their midribs, the margins are entire, tapering at base and tip.

The species distribution is widespread from Namaqualand to the Cape Peninsula and the Eastern Cape. The diverse habitat includes stony slopes, coastal limestone, short grassveld and fynbos. The species is not considered threatened in its habitat early in the twenty first century (Vlok and Schutte-Vlok, 2010; Manning, 2009; Gledhill, 1981; iSpot).