Home » GENERA I-L » Indigofera » Indigofera dimidiata
Back to Category Overview
Total images in all categories: 8,979
Total number of hits on all images: 3,981,881 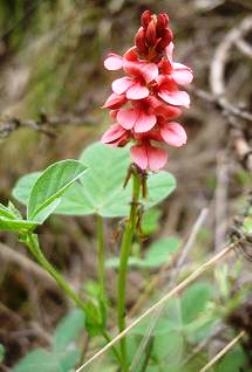 Indigofera is a genus of flowering plants characterised by a fringe of hairs along the upper margins of the keel petals of the flowers. There are forked hairs on some plant parts.

The lower two petals of an Indigofera flower together form the keel. The upper petal at the back is called the banner, the two lateral ones are the wings. The five sepals, usually green and sometimes hairy, subtend the corolla of five petals. The sepals that form the calyx have no shape differences among them, forming a radially symmetric calyx.

The cerise flowers in the picture grow in a dense raceme. Raceme means that the flowers are spaced or clustered up a central, main flower stalk, with pedicels or little individual stalks attaching each flower.

All Indigofera leaves are compound, but some have more pairs of lateral leaflets.

The leaves on the Indigofera dimidiata plant in picture have three wavy, rounded leaflets. The plant is found in montane grassland in South Africa, Lesotho and Zimbabwe to Malawi. It is seen flowering here in the Mkhomazi Wilderness Area of the KwaZulu-Natal Drakensberg in January. The normal blooming season is summer (iSpot; Wikipedia; www.zimbabweflora.co.zw).