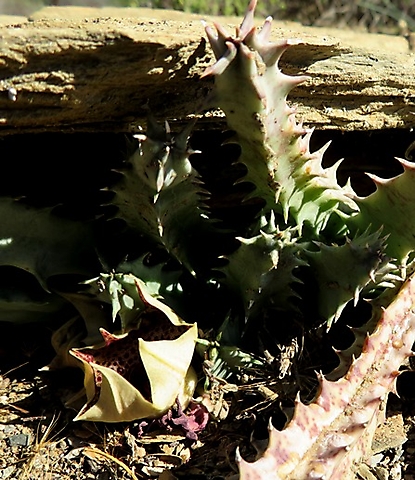 Huernia is a genus of dwarf stem succulents, perennials that form part of the Apocynaceae family. The generic name honours Justus van Heurne, a Dutch doctor and probably the first to collect and document plant species at the Cape. His contribution was rewarded or punished by the misspelling of his name in perpetuity.

Huernia stems are erect, leaning or prostrate, forming clumps or mats. The smooth stems are four or five-angled, occasionally six-angled, with longitudinal rows of acutely pointed teeth or tubercles. Rudimentary leaves are inconspicuous, sometimes persisting as bristle-tips on the teeth.

A single inflorescence, hairless and cyme-shaped, may grow on a stem, emerging from its lower half. The flowers open in succession, growing on short and thick peduncles. The calyx has five small, ovate to lanceolate, pointed lobes.

The corolla tube is short, often bell-shaped, with or without an annulus or prominent ring around the flower centre. There are five corolla lobes with secondary, mostly smaller lobes in the sinuses, the recesses between the main lobes. These additional five "Huernia points" are diagnostic of the genus, the corolla margins otherwise smooth.

The outside surface of the corolla is mostly smooth and hairless, the inside usually covered in papillae or tubercles, sometimes with hairs on top that may be club-shaped. The corolla colours are mainly shades of red, yellow or brown.

There are outer and inner coronas in the flower centre. Each has five lobes, separated vertically. The outer corona has stalkless, velvety lobes positioned against the flower base, forming a disc connected to the staminal tube.

The inner corolla lobes are variously shaped and smooth, arising from the top of the staminal column and positioned over the anthers. The inner corona lobes have rounded or ridged protuberances at their bases. Shape differences of the inner corona have been used to divide the species into four sections.

The staminal column is erect with a triangular nectar opening and a fleshy protuberance. The anthers are positioned horizontally on top of the style head. An anther has two locules, the anther wings erect.

Pollination is performed by flies attracted by the carrion scent of the flowers.

The fruit is an erect, spindle-shaped follicle with a smooth, hairless surface. The ovate seeds are nearly flat with hairy tufts attached to their tips.

There are 64 Huernia species in Africa and Arabia, 39 of which occur in the drier parts of southern Africa. Some Huernia species serve as famine food in Ethiopia. Many of the plants feature in horticulture.