Home » GENERA G-H » Huernia » Huernia barbata subsp. barbata living as a troglodyte
Back to Category Overview
Total images in all categories: 11,506
Total number of hits on all images: 6,514,568 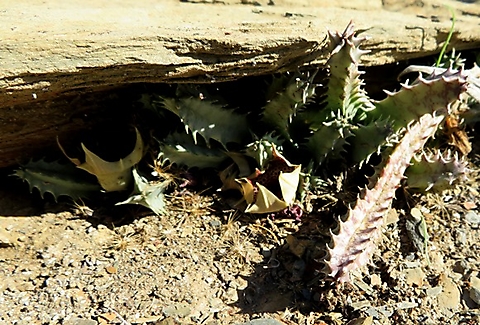 Previous
Image 4 of 56
Next

Huernia barbata subsp. barbata appears to be comfortably settled here in unusual cave-like lodgings on the farm Minwater near Oudtshoorn. But the normally erect stems are forced to grow at an angle to see the sun or at least the light. This resembles the behaviour of human cave dwellers of old who had to get out when the smoke of the cooking fire burnt their eyes too much. Unless they became adapted to a particular form of pink eye.

One enthusiastic long stem in picture developed a club-shape, ended up in falling flat. Other troglodytes used clubs to defend themselves.

The half-open flower in picture has five erect lobe tips, pale beige on the outside and full of maroon promise on the inside, only half revealed so far (Frandsen, 2017; Bond and Goldblatt, 1984; White and Sloane, 1937; iNaturalist; http://llifle.com).