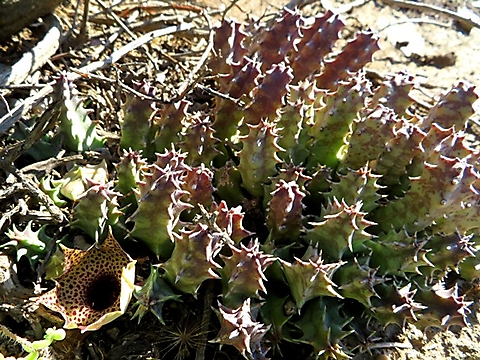 Previous
Image 1 of 56
Next

Huernia barbata subsp. barbata is a dwarf stem succulent reaching about 6 cm in height. It spreads in forming clumps of the erect stems, sometimes wider than 25 cm.

The fruits are paired, spindle-shaped follicles, resembling antelope horns. Numerous seeds are released when a ripe follicle dehisces along one side. Each small brown seed is attached to a plume of long white hairs, facilitating flight in wind dispersal.

The subspecies distribution is in the Northern Cape from Namaqualand and inland, ranging through the Western Cape Karoo and Little Karoo to the Eastern Cape as far as Kariega (Uitenhage).

The habitat is karoid scrub, the ground often stony. The subspecies is not considered to be threatened in its habitat early in the twenty first century (Frandsen, 2017; Bond and Goldblatt, 1984; White and Sloane, 1937; iNaturalist; http://llifle.com; http://redlist.sanbi.org).