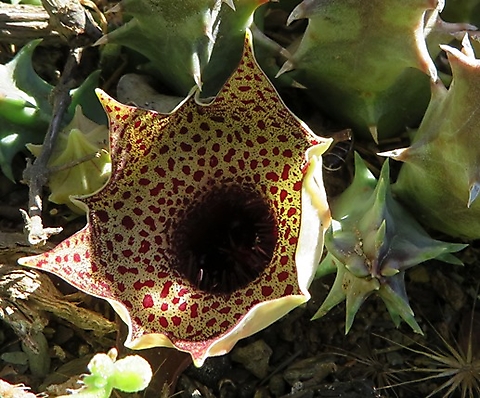 Previous
Image 3 of 56
Next

Two to five flowers of Huernia barbata subsp. barbata grow on slender pedicels of less than 1 cm long, emerging from low down on a stem. They open successively, their blooming season occurring from the end of summer through autumn. The photo was taken in May.

The bell-shaped corolla has five narrowly attenuating, nearly triangular lobes that ascend and spread or sometimes recurve gradually. Pale beige or sulphur yellow on the outside, the lobes are spotted blood-red to purple on the similarly pale coloured inside surface.

There are five small, secondary lobe tips halfway between the big ones in the valleys or dips, the sinuses of the corolla margin. These little points are a feature of the flowers of several Huernia species.

The scattered corolla spots have about random shapes and sizes, becoming denser to continuous or parallel rings inside the dark cup or widish tube of the lower corolla. Some colour differences occur in the species.

Fleshy, brown papillae are scattered inside the cup, topped with stiff, club-shaped, purplish hairs. The papillae are variable in shape, the hairs in length. The papillae continue while diminishing onto the corolla lobes, graded down to tiny bulges. It is these corolla hairs and papillae that gave the species its name, barbata, a Latin word meaning bearded.

Inside the base of the corolla there are the usual small outer and inner coronas of Huernia flowers. The outer corona is five-lobed and blackish to blackish red, the lobes long and narrow with notched tips. The inner corona lobes are slender and convex, tapering to pointed tips that converge over the style in the centre of the flower base (Frandsen, 2017; Bond and Goldblatt, 1984; White and Sloane, 1937; iNaturalist; http://llifle.com).