Home » GENERA G-H » Hermannia » Hermannia vestita
Back to Category Overview
Total images in all categories: 9,570
Total number of hits on all images: 4,299,800 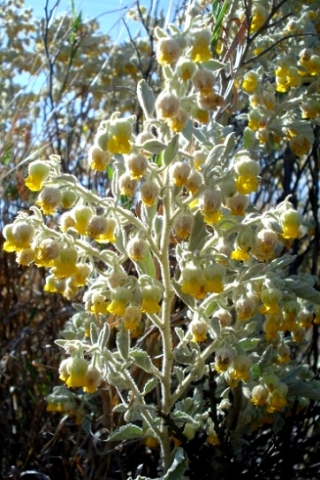 Hermannia vestita, in Afrikaans the swaelbossie (little sulphur bush), a name sometimes shared with H. desertorum, is a hairy shrublet growing to 30 cm. It grows in the northern parts of the Karoo in the Western and Eastern Cape and in the southern Free State.

The plants may form a ground cover on steep slopes, often near the rocks where hyrax live. It is not highly palatable, browsed when other options become less prevalent.

This species used to be called H. candidissima. It is not threatened in habitat early in the twenty first century (Shearing and Van Heerden, 2008; www.redlist.sanbi.org).